By: Diane Kashin, Ed.D, RECE. In my last blog post, I wrote about outdoor play and encouraged early learning teachers to look beyond their fenced in playground in the hopes that children may be given the gift of place. I referred to a quote that I read many years ago from Loris Malaguzzi that asks us to look beyond the wall and that there is always a beyond. The wall is a metaphor for the status quo. It is characterized by habituation. When we fall into habit in our practice, we become stale. In another blog post, I wrote about seeking the novel to avoid habituation and referred to the presentation Cindy Green and I have prepared for the Fairy Dust Summer Conference Inquisitive Learners Require Curious and Passionate Teachers. 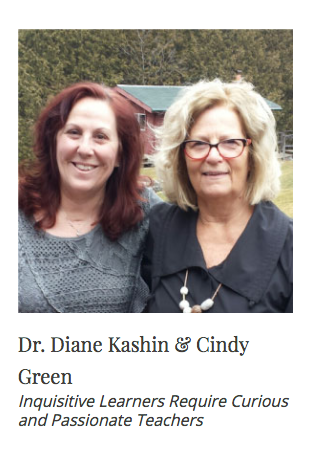 This was our first presentation of this type and it was exciting to try something new. Even though we were nervous about doing voice overs, we forged ahead and in the process learned something. I haven’t always been accepting of the new in my practice. There have been times when I erected a wall when faced with cognitive dissonance. In our presentation, Cindy asks me to recall a time when I refused to look beyond the wall. It may have been almost ten years ago, but the memory came back to me like it was yesterday. Cindy and I were both teaching in the School of Early Childhood Education at the same community college. We shared many passionate discussions about curriculum and pedagogy but when I started teaching in the degree program I felt disconnected to the courses I once taught in the diploma program. In a conversation with one of the professors who was now teaching these courses I asked her for an update. When she told me that an important focus in the curriculum courses was schema play, I shut down! I didn’t know anything about schema play and put up a wall. I have since recognized the importance of schema play to early learning. For many years, schema play has been a phenomenon in the United Kingdom as reflected in Chris Athey’s research that began in 1972, influenced by Piaget’s thinking about cognitive structures and mental maps. It was Athey that first looked at these “play urges” inherent in play within the nursery school setting. It has taken me a long time, to take down the wall to see what is beyond.

When I finally looked beyond my wall, there it was! Schema play – these repeated patterns of behaviour that children exhibit are fascinating to observe, think about and discuss. Curtis, Lebo, Cividanes and Carter (2013) in their book Reflecting in Communities of Practice use one of our favourite loose parts – buttons as a prompt to discuss schema play with others. They list seven common schemas that are often evident during button play. Cindy and I like to add an eighth to our “Buttons by Schema:

When I finally opened myself up to schema play, I could see early learning teachers explore schemas in our workshops. Schema play became a way to study how theory connects to practice. Schema play became a way to deepen observations and to find meaning in children’s experiences. When we came up with Buttons by Schema it was from inspiration from Michelle Thornhill and her work on Loose Parts by Schema. 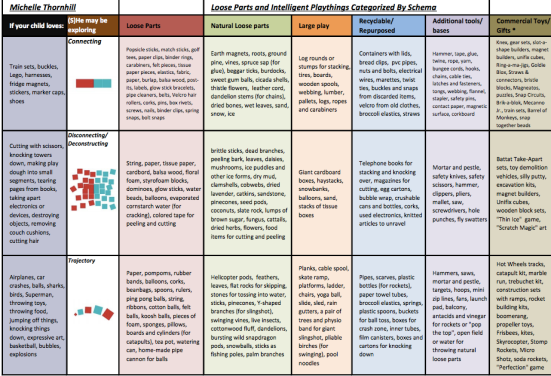 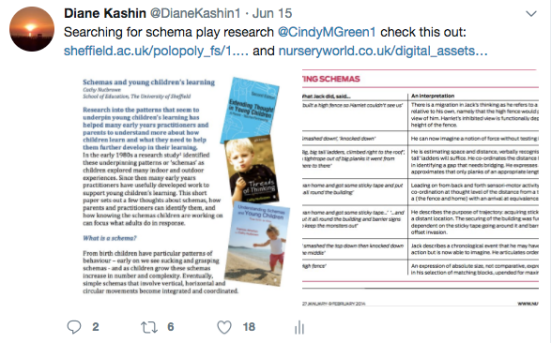 Beyond the wall, there is always a beyond. What is beyond your wall? Embrace the new and novel. This is the way we learn and move forward!

5 thoughts on “Beyond the Wall: There is Schema Play!”