By: Diane Kashin, Ed.D, RECE. When I first began teaching early childhood education about three decades ago, there were many discussions about the language that we use  to name what we do. I remember that our conversations related to moving away from using the term, “activities”. At the time, early learning teachers were setting up activities that were teacher directed and created. There was often an expectation that “all children come to the table”. I remember vividly one of my first times that I visited a student doing a placement and watching children being asked to add “apples” to a construction paper cut out of a tree. Only when they completed the task, could they return to playing. I was horrified. I understood why we needed to re-examine terms. As a faculty, we had decided that instead of saying “activities” we would use the term “learning opportunities”. Opportunities sounded more invitational. They sounded more open-ended. We hoped that when our students planned and implemented learning opportunities in their placement that they would not be closed-ended “crafts” but rather learning experiences that had many possibilities or opportunities for the children’s interpretation. Reflecting back on this memory my colleague, friend and most importantly “critical friend”, Cindy Green and I recalled all the terms we had used to describe what was provided for children including the ones that we often hear being used today. Does the language that we use matter?

Recently I had the honour of attending the “Paradigm Project” Conference in Waynesboro, Pennsylvania. I presented three workshops there and had an amazing experience connecting with educators committed to shifting practices from the traditional to the progressive. The Paradigm Project is a grassroots change initiative working to maximize the quality of Jewish preschools. This is a group of current and aspiring leaders in the field of Jewish early childhood education who engage in professional development together. There was so much inspiration to draw from during our days together that I wished there was more time, but I know that the learning and reflection will continue. During my time in this inspiring environment surrounded by nature and passionate educators, I had the opportunity to lead a discussion about invitations and provocations. Attendees at the conference had been invited to bring with them “provocations” built around Jewish values that served as “pop up” centre pieces at our tables in the dining hall. 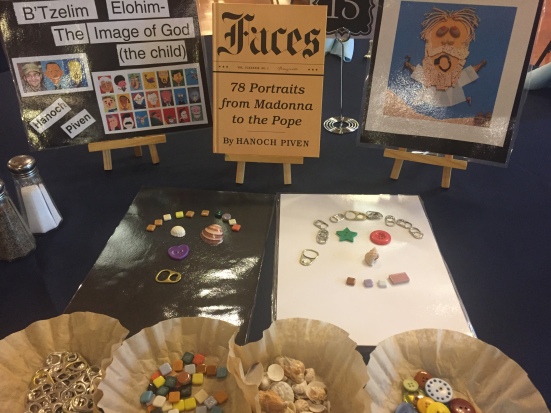 Of course, our discussion involved coming to terms with the term “provocations” and the question was asked whether what was presented on the tables were actually provocations or something else. I have to admit, that in the past, I have suggested to educators, that the term that is used doesn’t really matter and have suggested, “just do good things with children” rather than focus on differences between words. However, I have now realized that coming to terms with terms around invitations and provocations can be an important part of reflective practice. In fact, part of one of my workshops was an invitation to engage in experiences based on the book, Stick and Stone that connect to Science, Technology, Reading/Relationships, Engineering, Arts and Math – not all of my invitations are responded to – leading me to reflect on which are and why? Here is a video of a group that responded to the invitation to create a mandala (arts) and videotape (technology).

This workshop was inspired by someone out there in the social media world that shared images of children who responded to an invitation based on the book. If anyone knows who the owner of these images is, please let me know so that I can give credit to this inspiring work. I was so excited when I found it as I was trying to come up with a workshop where math and literacy intersect with nature. In my state of euphoria I failed to note whose work it was before screen capturing. It however, is a wonderful example of an invitation that became a provocation. Without the response, this would have remained an invitation. Invitations are good. This is not an either or situation. It offers us a lens from which to view the complexities of our practice. 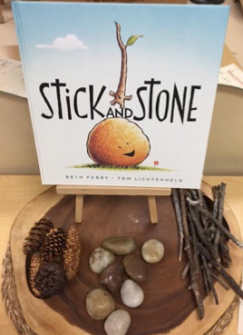 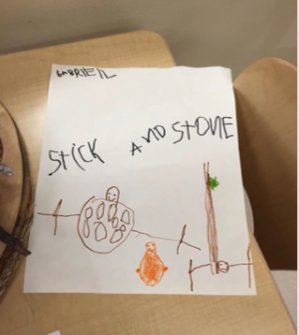 When I shared my understanding with the group at Paradigm that a provocation is an invitation that has been responded to because it could not be ignored, as it provoked a response, I think it was a light bulb moment for me and others. All that we do with children should be invitational to support the premise that children learn through play. Play is freely chosen. What was shared during the Paradigm Project could be seen as invitations and if responded to because they were artfully and carefully presented, they could become a provocation. If the invitation is ignored, it becomes an opportunity to reflect on why. Could it be that the children were just not interested? Was the invitation hidden away in a corner? Was it presented during a time when children were busy with other experiences? It is here that the invitation provides us with a gift – an opportunity to reflect, improve and change.