By: Diane Kashin, Ed.D, RECE. My good friend Debi Keyte Hartland who inspires me with her insight on pedagogical documentation recently wrote a blog post that spoke to the challenging times and the potential of documentation to make visible the values of a humane society. Perhaps it is a sign of the times that I too have been thinking about the potential of play to make visible the values of early learning teachers. Do they value children’s competency, capacity and potential? Are they supporting children’s independence and autonomy or are they looking to control children’s experiences in order to support children to become obedient and respectful of authority? Play offers children an opportunity for freedom. It gives them the chance to feel independent and in control. Those who would suggest replacing play in early learning with work (or the dreaded worksheets) might be doing so to remove this freedom from children? Play is freedom and so much more. According to Hirsh-Pasek and Golinkoff (2003), there are five essential elements that make play what it is. Play must:

Last week, in my History and Philosophy course with second year, ECE degree students we reflected on our interpretations of play and illustrated them in a word cloud. The words that appear larger were said more often by the 62 students in the class. 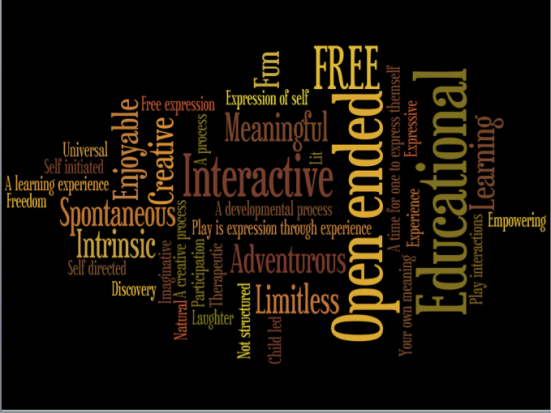 Free, fun, open-ended, interactive and adventurous experiences happen through play, especially play outdoors! When the students reflected on play in their reading response to an article about Plato some of them made connections to current political climates. Play is political. When early learning teachers support play they are being political. When they don’t they are also being political but from a position at the opposite end of the political continuum from left to right. I have written about politics before and it is a very heady subject that requires continued reading and reflection. I am currently trying to absorb an article that speaks to the political world of children  and considering the politics as well as the pedagogy of play.

What would be the political outcome of a systematic approach to teaching and learning that supports play? Jean Jacques Rousseau (1712-1778) wrote the book “Emile” in 1762 depicting a world in which the child should roam freely, explore the woods and fields, and learn to read through play. Rousseau believed that play was a child’s right and was very influential in this time period. He wrote that Emile should be taken outside everyday, “far out into the fields” instead of suffocating in the “exhausted air indoors” (Rousseau, 1889, p. 41).

The ideal world for a child was (and still is) to play outside.

…let him run about, play, fall down a hundred times a day; oftener the better, as he will sooner learn to get up again by himself. The boon of freedom is worth many scars. My pupil will have many bruises, but to make amends for that, he will always be light-hearted. Though your pupils are less often hurt, they are continually thwarted. Fettered; they are always unhappy. (Rousseau, 1889, p. 41)

Hats off to Rousseau who after centuries continues to ground our thinking about the importance of full-body play outdoors! This is play that is joyful and political! I am looking forward to more joyful play on May 6th when early learning teachers and other educators get together to participate in the Pedagogy of Play in Nature conference to experience a pop up adventure playground and a keynote address by Marlene Power, Executive Director of Child and Nature Alliance of Canada. In addition, there will be stations set up throughout the forest facilitated by educators who value outdoor play. They will share how they support children to be competent and capable community members with rights and voice. Support a democratic approach to early learning and children will learn to control themselves as active citizens of their world. That’s play, pedagogy and politics!

5 thoughts on “Playfulness and Playlessness: The Politics and Pedagogy of Play”