All of this is a great forest. Inside the forest is the child. The forest is beautiful, fascinating, green, and full of hopes; there are no paths. Although it isn`t easy, we have to make our own paths, as teachers and children and families, in the forest. Sometimes we find ourselves together within the forest, sometimes we may get lost from each other, sometimes we’ll greet each other from far away across the forest; but its living together in this forest that is important. And this living together is not easy.

Early learning professionals, in their pursuit of the new—the innovative—too often overlook the traditions that inform the sector’s approach to pedagogy. We all stand on the shoulders of giants. Spodek & Saracho (2003) remind us that only by building and understanding the past, can we come to understand the practices of the present and seek better ways of working with young children in the future. Interestingly, Loris Malaguzzi was described by those who knew him as a gentle giant, and his thoughts on teaching and learning have a great deal of currency today and a symbiotic connection to learning in and with nature.

Malaguzzi is quoted as saying, “creativity seems to emerge from multiple experiences, coupled with a well-supported development of personal resources, including a sense of freedom to venture beyond the known” (Malaguzzi, 1998, p. 76). Learning in and with nature, is venturing beyond the known. It leads us to forge a path of possibilities, but as Malaguzzi suggests in the opening quote, we have to make our own paths, as teachers and children and families, in the forest. Malaguzzi, the central notion for the philosophy of Reggio Emilia resides in the concept of images. The image of the child is one where children are seen as strong, competent, intellectual builders of theories (Kashin, 2009). When we are in nature we can all be strong, competent, intellectual builders of theories.

In his lifetime Malaguzzi was an elementary school teacher and taught middle school; he had a degree in pedagogy and psychology. He worked as a psychologist for 20 years in the Municipal Psycho-Pedagogical Medical Center, which he founded. He cycled to Reggio Emilia to a village called Villa Cella just outside of the city because he was inspired by a group of citizens building a school with the benefit no money and only the rubble left from the devastation of WWII. “By all accounts, including his own, Loris Malaguzzi did ride his bicycle a great distance to join what would become a historical school movement”.

When I was in Reggio Emilia in 2006, I had the opportunity to visit that first school in Villa Cella. I will always remember feeling connected to a movement. I felt an overwhelming strong connection that was fueled by passion, a desire to share and a quest to learn more. I recognize this feeling again when I reflect back on my five days in the forest when I took the Forest School Practitioner’s course offered by Forest School Canada. Now the feeling of being part of a movement is even stronger as I bring together my inspirations in the context of learning in and with nature. I feel like I am now joining Malaguzzi in the forest that he spoke about in the opening quote. I continue to be inspired by Rinaldi, Vecchi and on a more personal connection with Lella Gandini, three inspiring women who have expanded my learning about what it means to be Reggio inspired.

I see the forest as being the place where authentic, meaningful teaching and learning can take place building on Dewey’s pedagogy of place and Malaguzzi’s image of the child – this is where it can begin. Yet, as Malaguzzi suggests we can get lost in the forest. I am an educator of adults who work with children. I have reflected upon my life experiences and identified my values and beliefs as part of the process of teaching and learning. The forest or anywhere in nature is the environment for early learning to begin to build the competent, capable, intellectual theory building community of teachers and learners.

Please join us to learn more on November 10th at our workshop with the York Region Nature Collaborative. 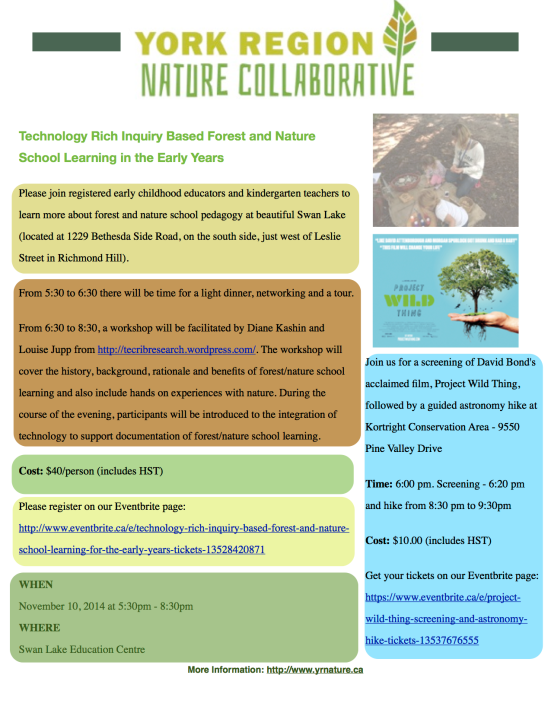 One thought on “Reggio Inspired Learning In and With Nature”